What is an intranet?

As web software continues to evolve, cloud computing moves firmly into the mainstream, and discussions abound about the corporate digital workplace and the necessity to access anywhere on any device, I thought it would be timely to pause and think about what intranets are, and indeed what they are not.

It only has 2 words and it gets across the main concepts of being web based and not being available to everyone, but instead to only certain authorised people.

The problem with this simple approach is that any restricted access web application would then be an intranet – and this is where the problems start. This is particularly problematic in recent years where almost all software is web based – and so if we don’t add clarity to this definition then everything an organization uses would be the intranet.

Many definitions exist – and over the years some of these have become out-dated in their general applicability to modern intranets. Personally, I don’t like definitions that include any of the following – and these all appear in the top-ranking definitions when searched on Google

“… contained within the enterprise”

This one has been left behind by the emergence of cloud computing – so any sense that contained within means physically located inside makes this kind of definition confusing. We understand the intent – but it is just too problematic. Especially since even the users are not necessarily from the organization – see next definition.

“… accessible only to an organizations staff”

This definition is often used when drawing the distinction between an extranet and an intranet – but in these days of collaboration tools between key suppliers and information sharing with important customers this kind of wording risks missing a lot of the hard value that intranets deliver.

Especially as in software terms integrated extranet and intranet functionality is often provided by the same platform. So this phrase is best left to the one word “restricted”.

“… an internal website that helps employees get stuff done”

I like the intent of trying to use simple colloquial words – in fact, we do the same at Claromentis. It helps to focus on practical business intent and not the technology used. But again, this is dangerously inclusive of all kinds of software that we instinctively don’t think of as “the intranet” but something else.

There seems to be a common sense feeling that a web-based project management application for example – even if only certain users can access it – is not best described as an intranet. It is a project management tool. But clearly its absolute focus is to help you accomplish tasks. To us it belongs alongside the intranet in the bigger picture of the digital workplace – see later.

How can we add clarity to the question of “What is an Intranet?”

As a compliment to this informational and sharing side there are a set of intranet applications within all modern intranets.

I believe that most of the functionality that the intranet applications should provide addresses core needs that are common across all departments and indeed all organizations – such as absence management, claiming expenses and simple things like booking a meeting room that everyone might have a need to do in a consistent and centrally managed way.

All these things we would expect to be an integrated part of the intranet and not an isolated application. They are required by all and simple in scope. They can be delivered by standard applications that can be configured to meet each company’s needs, rather than requiring a custom process or application.

“A restricted internet providing staff details, information management and collaboration together with a set of configurable applications that are generally useful to most users as part of their routine working life.”

This of course is flexible, not something to be memorised and it has a few too many words – but at least it attempts to offer clarity on what an intranet is – and what it is not.

A major part of many intranets is the requirement to use business process automation to help with efficiency and improve productivity. This is entirely appropriate and getting this right delivers a lot of hard, measurable value.

But it is reasonable to describe these kinds of applications as a Business Process Management Platform – and not as an intranet. Major vendors produce incredibly significant applications to address this need – and they certainly would not describe them as being intranets – but would instead focus on the ease of integration with the intranet which they assume would exist in parallel.

One problem with this set of functionalities is that because there is so much value, and the processes to be effective must be available on the intranet – many companies will instinctively include this in their requirements for an intranet when considering purchasing a new solution. This leads to the possibility of confusion when trying to define an intranet.

We also see merit in the thought that since business itself is to some extent “just a set of processes” – creating outputs that are of higher value than the cost of purchasing inputs then reassembling and improving them into products and services – so as intranets are the core framework for delivering applications applicable to all staff then it is indeed tempting to include them as part of the intranet.

A counter argument is that for smaller companies in particular process is often out of scope for intranet deployments – and for larger ones they are so important that they are often sourced separately from specialist vendors.

As we begin to feel we can define what an intranet is we do have to deal with another confusing aspect. This is the fact that many other applications are quite rightly made easily accessible from the intranet home page.

This is appropriate – the all-important intranet home page for many organisations is not only a key part of the intranet but is also a gateway to other applications that users need to get their work done. In this sense it is sometimes described as a Portal – a word that has evolved in meaning over the years.

In basic terms a user accessing a specialist web application in this way may describe it as “on the intranet” but in our definition it is not a part of the intranet – instead, it is part of the digital workplace – just like the intranet itself is.

Evolution of Intranets over time.

“An intranet is a private network, operated by a large company …”

This reflects the fact that just 5 years ago Intranets had a lot less functionality – but paradoxically were much more complex to deploy and required organisations with IT departments to use them effectively.

Modern intranet platforms do so much more and yet are so easy to deploy that even the smallest companies can use them – with cloud computing they need no infrastructure or internal IT knowledge at all.

Danger of too many ways to do things

One of the risks inherent in comprehensive intranet solutions is that there are in fact very often many ways to accomplish something. As this cartoon we created in response to a genuine experience with a customer illustrates very well:

Choice and freedom are not always the holy grail we might consider it to be as intranet vendors – sometimes information can be harder to find precisely because it could have been communicated in many ways.

What is the future of Intranets and what is their place in Digital Workplaces?

We expect them to certainly become even more user centric, beautiful, and engaging environments that are accessible on any device and a real pleasure to use. But these are all just attributes – rather than defining what they should do.

At Claromentis we consider them as a key part of a digital workplace – the definition of which is even more contentious than that of the intranet.

But in our view the same points can simply be extended to define the digital workplace. It again focuses on integration and a consistent user experience to provide solutions that most users will use most of the time. And provides seamless access to external applications that are more specialised.

It is just that the playing field has grown. So, to keep the definition of an intranet meaningful we consider it as just one important part of the larger workplace.

To us, we have four cornerstone platforms that we hope meet our goal of offering an integrated and consistent solution providing most of the tools that most users need to accomplish their work. 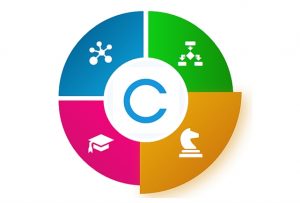 To us these key areas are

This list of course can be changed and debated endlessly.

I do want to clarify what we are talking about here – this is the “integrated and consistent UX part of the digital workplace”  that we feel represents the core functionality that are applicable to most users most of the time. It itself is just a part of the larger digital workplace which comprises all the software and hardware the user utilises as part of their work.

The integrated part with a consistent UK also represents the area that software vendors like Claromentis should deliver – since they cannot provide all functionality – that would be impossible and any attempt to do so would result in bloated software with high price tags and weak functionality in these core areas as the vendor tried to achieve too much.

For example, we can argue that all companies make sales so a CRM or sales management tool should be a part of the integrated workplace instead of a specialised application accessible from it.

I look forward to any thoughts on “what is intranet software?”, where they are going and how they relate to digital workplaces – both the idea of the integrated and consistent UX core digital workplaces and the more fragmented landscapes we are all so used to using!