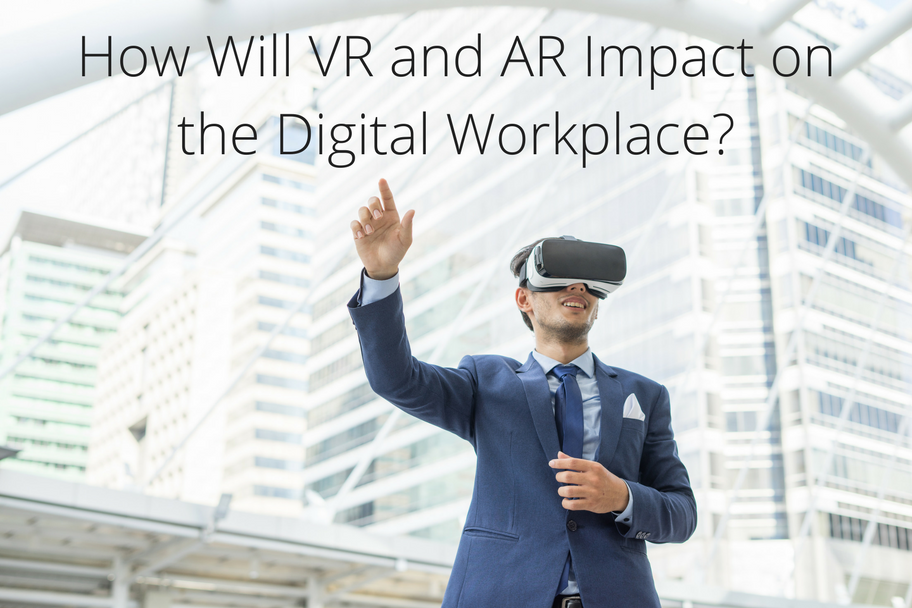 Keeping up to speed on the next big thing is no longer a luxury for organisations with ambition and drive – it’s a commercial necessity.

Many pundits believe that the big trend to watch is something you may have previously dismissed as only relevant for gaming and big-spend advertising – Virtual and Augmented Reality.

There are strong signs that AR in particular is moving in to mainstream business communications. Which means it could soon become a commonplace feature of both your intranet software and marketing activities.

Clearly, knowing your VR from your AR is mandatory. Gaining an understanding of how the latter is likely to change working practices, makes great commercial sense.

VR and AR in a nutshell

This technology and its commercial applications are so “hot off the press” that there is still some confusion about what Augmented Reality actually entails, as compared to Virtual Reality, particularly as media attention has largely focused on VR.

VR involves a totally immersive experience. Expensive and often unwieldy equipment is used – such as head gear. Software creates an alternative world, and VR users can receive sensory stimulation that is entirely divorced from the physical realm.

For high end product promotions and major conferences and trade shows, VR can be a powerful tool. Your customers can be transported to a Caribbean beach or the moon, and can make choices to engage with the audio-visual content that surrounds them.

However, the cost is not the only drawback to VR as an everyday business communications medium. There is a degree of mistrust in an entirely fabricated reality, especially as the equipment is totally immersive and can actually make people fearful or ill.

So, for example, you can scan a desk to receive schematics and diagrams. Or, scan a poster to interact with video content associated with the core information displayed.

Advantages of AR in digital workplaces

AR offers the potential to create multiple layers of information for business communication, collaboration and control.

One of the most significant features is that the equipment used to reveal this data is largely something that is widely available – a mobile phone.

Remember the Pokémon Go phenomenon? People of all ages were running around all over the place to find monsters on their phones, in parks and public places. That was AR, and a clear sign of how captivating and inclusive it can be.

Perhaps one of the biggest signals that AR is about to become hugely significant, is the fact that Apple has announced that it is adding an “AR chip” to future mobile phone handsets.

With the right capabilities integrated in to your intranet software, you could soon be providing your staff with a whole new level of information that they can manipulate and engage with using their mobile devices.

Applications of AR in the digital workplace

Already, any organisation with a truly integrated digital workplace, can gather, share and collaborate on huge amounts of data, across the world, instantly. AR will serve to lift that into three dimensional representations.

For example, if you are showing someone the layout of a new building or a location, using AR they can experience 360-degree tours and pan in and out on features, receiving auxiliary data of interest.

In the future, a team of people from around the world will be able to “sit” in a room together to manage projects using immersive imagery and information they can all see and manipulate.

It will also be possible to train people in a far more insightful and realistic way from a remote location. Imagine a lorry driver using AR to explore a challenging manoeuvre at a location they have yet to visit. Or, an engineer learning to make changes on a ship at sea, from the comfort of their desk back at HQ.

The ways in which AR can be used in a business environment are highly diverse. Data accessibility, immersive experiences and employee understanding can be elevated to a whole new level.

It will be a superb way of saving money and improving productivity and control too.

A note of interest for anyone who believes that Augmented Reality is a recent invention, the term is believed to have been coined by a Boeing researcher called Tom Caudell in the 1990s. However, the technology to turn it into a commercially viable communications tool is more recent, and developing fast.

Stay ahead of the next big thing in consolidating and improving your digital workplace by getting in touch with the experts at Claromentis.