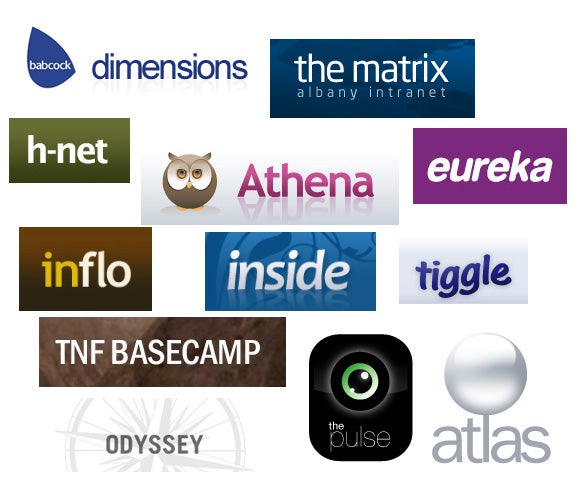 Choosing the right name for a intranet is probably one of the most exciting tasks for the Intranet Development Team. (By the time I am writing this I am still struggling to choose name for my baby, perhaps it’s not quite the same 🙂

I am seeing there are few interesting patterns based on what our clients decide in the end for intranet names.

Intranet system named after a Greek gods and goddesses, or Greek influence  is definitely the most popular.
Athena – from the Greek goddess of wisdom, the arts, industry, justice and skill, It is the name of Intranet system at Nominet UK.
Atlas –  Atlas was made to bear the weight of the heavens, or was it the earth, this is what will become our own Intranet, and perhaps we’re hoping atlas can help us bear the weight of daily project work and pressure from clients.
Odyssey – An ancient Greek epic poem attributed to Homer. Is the name of intranet for Prometheus Real Estate Company, keep it in-line with Greek theme.
Eureka – (I have found it) exclamation used by ancient Greek scholar Archimedes, appropriate name for Care UK intranet, it certainly has scholar and research flavour to it. Care UK  is hoping their intranet will become  the source of finding information for the entire organisation where every member of staff can say ‘eureka!’.

Putting ‘net’ at the end of a choosen word seems quite popular, it’s a hint to network, transmission, exchange information.  Here is some popular example  Infonet, datanet, skynet.

Or you can simply attach the company name with ‘net’ such as intranet for Hanover housing is called the h-net.

Intranet is a virtual place where information is stored; recently many companies are pushing collaboration and application through their intranet. Given this nature these are of popular word to represent the Intranet itself:

The Matrix – Albany Group named their Intranet “The Matrix”  apart from influence from popular sci-fi movie, in cyber culture matrix also means the Internet and other networks that flow into it are altogether.

Nexus – One of the most popular name for the Intranet adopted by many clients. It comes from the Latin “nectere” meaning “to bind.”. The Intranet is a collaboration hub.

Basecamp – is the name of The North Face intranet where they visualise their intranet is the a basecamp of outdoor lifes.

Adding “my” in front of company name emphasise on the sense of belonging and ownership. There are several companies who named their intranet with MY+Company name, such as  MySunPower  or  MyGFI.

Tiggle – is a clever acronym from “Tussauds Intranet Global Gateway Linking Everyone” – an Intranet name for Tussauds Group.

Inflo – Interesting play on word. It sounded like “Info”, Inflo is the name of the Intranet/Extranet system of Prefered Brands where they do flooring franchise business.

I am hoping this post will inspire many companies who are thinking about choosing name of the Intranet, why not run a naming competition to find out who comes up with the best idea within your company.